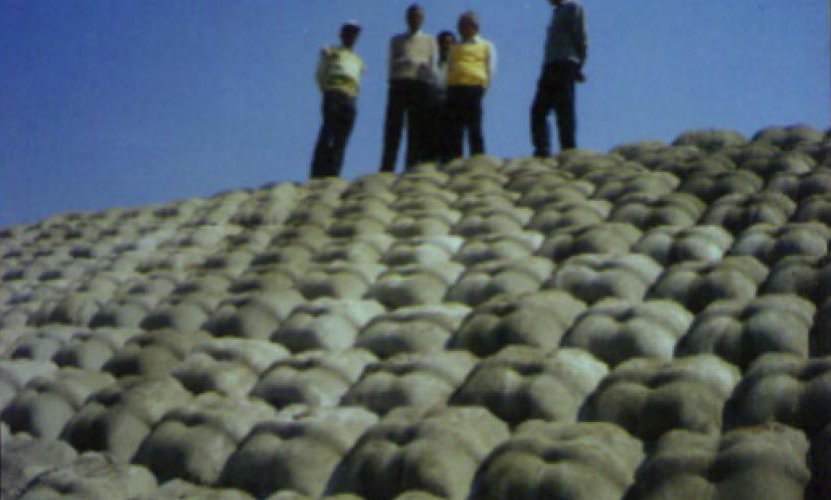 The flood protection dike along the Balason River, in the Republic of India, required a permanent revetment protection solution. The Balason flows in the Darjeeling District of West Bengal, India. It starts in the hills of Senchal and runs south into the plains of North Bengal, joining the Mahananda River.

The left embankment of the Balason River breached in the flood of 1998 cutting the highway to Mirik from Siliguri and also washing away the Dudhiya Bazar. Owner Darjeeling Highway Division of P.W. Roads, West Bengal, tried to construct the dike with huge concrete block and boulders. But the efforts turned out to be futile again during the monsoon of 1999.

HYDROTEX® Articulating Block Mattresses with revetment cables were selected by the owner for their constructability, adaptability and durability in a challenging environment. Gabion mattresses had a much higher cost compared to the HYDROTEX fabric forms and presented a construction challenge on a 2H:1V embankment. Both stone riprap and gabions presented alternatives, but the 2.5 m riprap and 300 mm gabion thicknesses would have required large tonnage of stone to be quarried in an environmentally sensitive region.

The embankment was prepared with local riverbed materials. A layer of non-woven geotextile was placed on the freshly built embankment and finally HYDROTEX AB600 was placed on top and pumped with a fine aggregate concrete slurry to cast the protective layer. To date it is in perfect condition and has not allowed any sort of deformation of the embankment. Also, the cast-in-place fabric formed concrete revetment system was much more cost-effective than the alternatives.