You are here: Home1 / Spillway Protection

Get a project estimate today:

Email us
Call us now

Get a project estimate today:

Email us
Call us now

Aside from providing slope protection at emergency spillways, HYDROTEX fabric-formed concrete provides permanent erosion control at dams, mines, and any other sites with chutes.

HYDROTEX is a highly versatile product and is typically used to protect chute and side channel spillways. It is typically not used to provide erosion protection at straight drop, labyrinth, shaft, ogee, and siphon spillways. However, our engineers can work with you to manufacture a fabric-formed concrete product for your specific needs.

How is HYDROTEX used for spillway protection?

Spillways are critical structures in dams for lakes, ponds, and other impoundments. When left unlined, the soil in these structures can erode and compromise the spillway’s integrity. Unwanted vegetation can also propagate, making the spillway less efficient and resulting in high maintenance costs.

The Solution: HYDROTEX Fabric Forms for the In-Situ Casting of Concrete

Keep maintenance costs low by casting a concrete mattress over the spillway with HYDROTEX fabric forms for the casting of concrete. Our products can provide hydrostatic relief, integrate internal concrete reinforcement cables, and offer other features as required. Permanent and maintenance-free, these mattresses effectively prevent the soil from eroding and keeps the spillway from losing the ability to properly channel water. 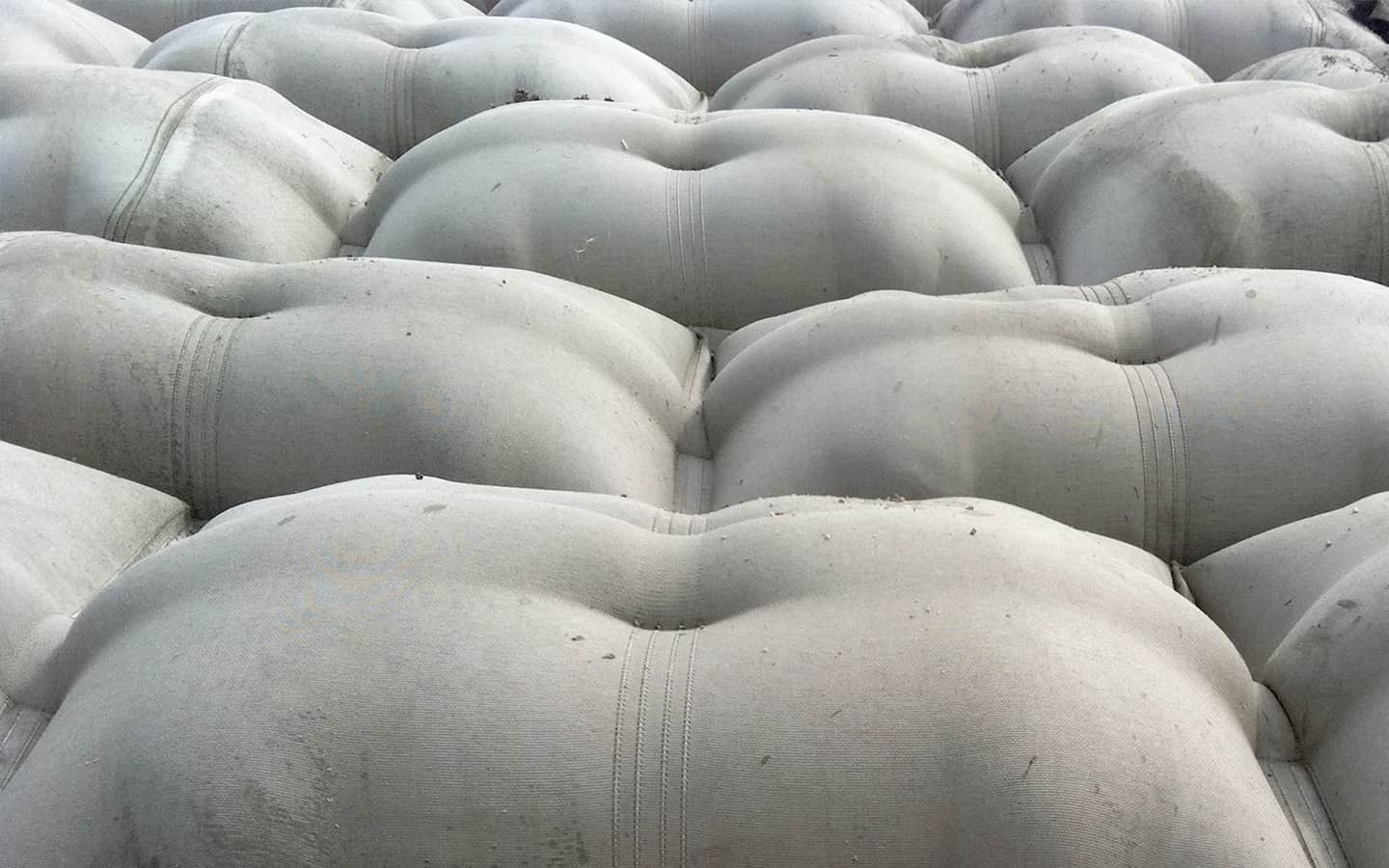 Have a pressing question? Want a consultation or project estimate?

Call us now
Email us
Submit this quick form

A spillway ensures that the dam doesn’t overflow or fail by allowing a controlled amount of water to spill from the dam.

Another solution we offer at dams is embankment protection.

Spillway protection is typically needed for: 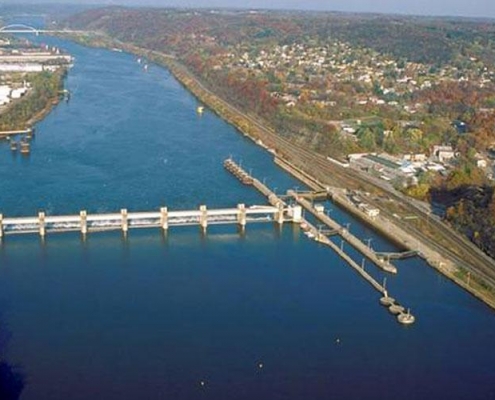 Enviromat Concrete Linings are installed to provide protection against periodic high flows. After installation, vegetation can be planted within the open structure of the lining to create a more natural appearance. Enviromat Concrete Linings are used in drainage ditches and on the upper slopes of channels, canals, lakes, reservoirs, rivers, and other water courses as well as for embankments subject to heavy run-off.

Enviromat Linings are comprised of concrete-filled elements and unfilled areas that allow for the establishment of vegetation.  Once the concrete sets, the defined unfilled and interwoven areas are opened by cutting the fabric and are planted or are filled with topsoil and seeded.  Within a growing season a vegetated cover will normally extend over the lining, resulting in an erosion control system with the hydraulic, ecological and aesthetic features desired. 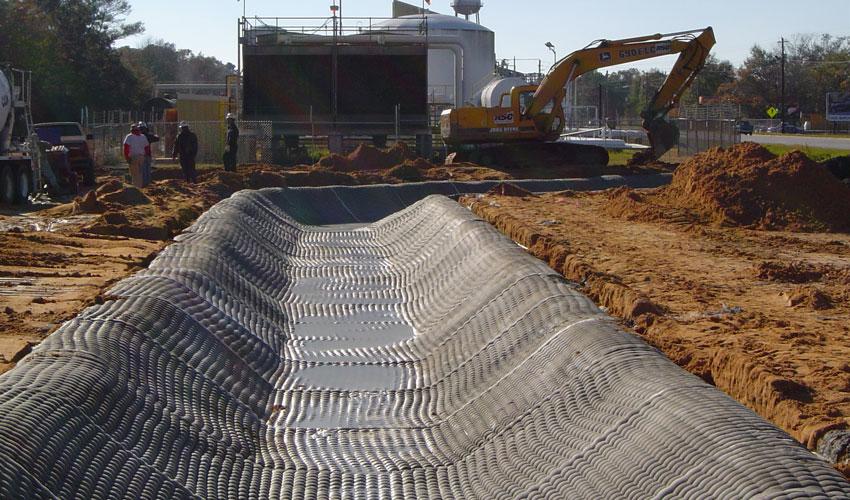 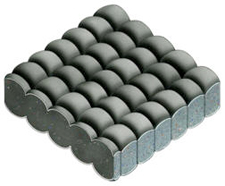 Uniform Section (US) Concrete Linings are similar to traditional concrete slope paving.  They create a solid, high-quality concrete lining with a relatively low hydraulic resistance and uniform cross-section.  Uniform Section linings are used to reduce the infiltration or exfiltration of aggressive waste and chemical fluids into or out of open channels and basins.  They are also used to reduce exfiltration in arid regions where open channels and basins require watertight linings.

Uniform Section Concrete Linings are resistant to leachate and most chemicals.  They protect geosynthetic liners from mechanical damage, exposure to UV light, and freeze-thaw cycles.  These self-supporting, high-strength linings permit construction on steep side slopes and replace the conventional use of clay or sand as liner protection. Placement of the forms and concrete filling can be performed without the use of equipment on the liner.  The tensile strength and abrasion resistance of the fabric protect the liner from the pumped concrete. 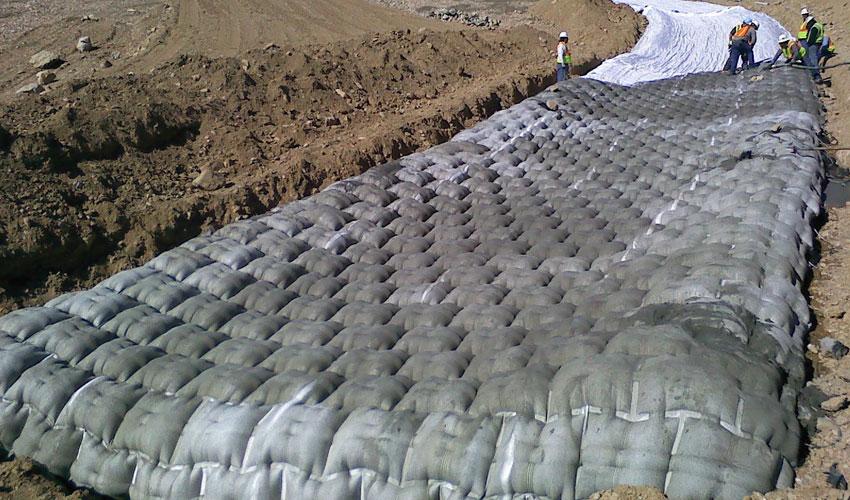 Submit a Request for an Articulating Block Specification

We’ll get back to you within 1-2 business days. All specifications are available in both nylon and polyester configurations.

Submit a request for a technical specification

We’ll get back to you within 1-2 business days. All specifications are available in both nylon and polyester configurations. 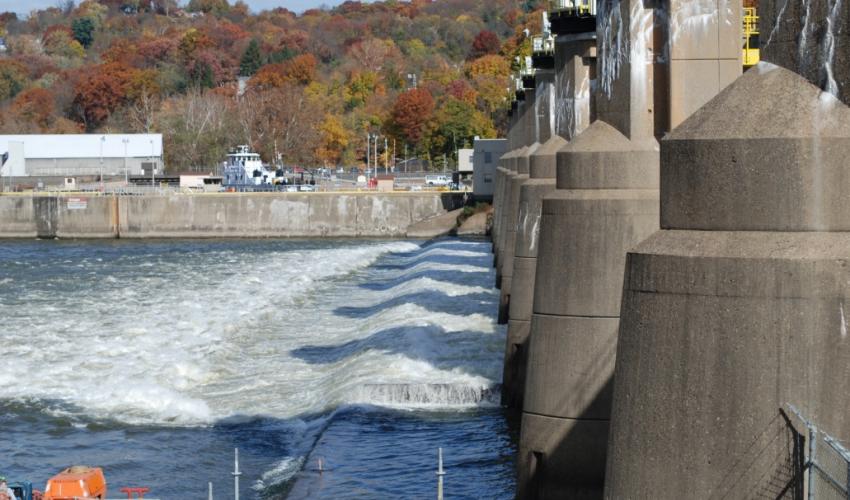 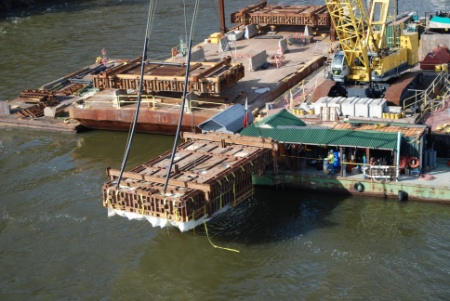 Emsworth Locks and Dams are located on the Ohio River immediately downstream from the city of Pittsburgh, Pennsylvania. The back channel dam and locks are located on Neville Island, Pennsylvania, at river mi 6.4. The dam length is 960 ft (293 m) and the water depth exceeds 30 ft.

During low-flow conditions the loss of the pools of the Ohio, Monongahela and Allegany Rivers, at the point of Pittsburgh, would cease all navigation. Shippers using Emsworth had estimated that loss of the dam would increase transportation costs by $130 million annually.

The $32 million U.S. Army Corps of Engineer’s Contract W911WN08B0007 was awarded to Trumbull Construction in July of 2008. Synthetex was brought into the project, working closely with the U.S. Army Corps of Engineers and Bergmann Associates for the design of formworks for the underwater casting of armor units for the scour aprons on both the Main and Back Channels of the Emsworth Locks and Dams. The concrete armor units ranged in sizes up to 32 ft x 18 ft x 6 ft and weights in excess of 15000 lb each. Prior to the installation of the HYDROCAST® Concrete Bag Scour Protection downstream of the dam, there were 10 ft (3.0 m) deep scour holes and 65% of the existing stone scour protection was in a failed state. Due to the extreme corroded state of the dam gates, failure of any one of seven lift gates would most likely cause a portion of the stilling basin to fail and possibly undermine the dam. The dam had been categorized as Dam Safety Action Class 1, urgent and compelling.

The scour protection measures consisted of grading, placing bedding stone, and installing HYDROTEX® concrete-filled bags downstream of the existing dam for six individual bays.  During the project, approximately 10000 yd³ (7600 m³) of concrete was placed in more than 200 individual armor units with no lost time for more than three years.